1. Competition Definition
The objective of the competition is to design and build an Autonomous Robot able to gather the maximum number of a team’s colored ping pong balls and score them inside a cylindrical tube before the time is done.

2. Platform Layout
The competition will be held on a 200cm x 200cm square platform with 20cm height boundaries. The platform will be all colored in the same color (Blue). There will one cylindrical tube of 23cm height and 4.5cm opening diameter (the same for both teams). There will be four black lines, connecting the totem to the corners of the platform, with a width of approximately 4 cm. A team scores a goal when a ping pong ball of the team’s color goes into the cylindrical tube. The balls of both teams will be spread randomly over the platform and will be yellow and white colors. 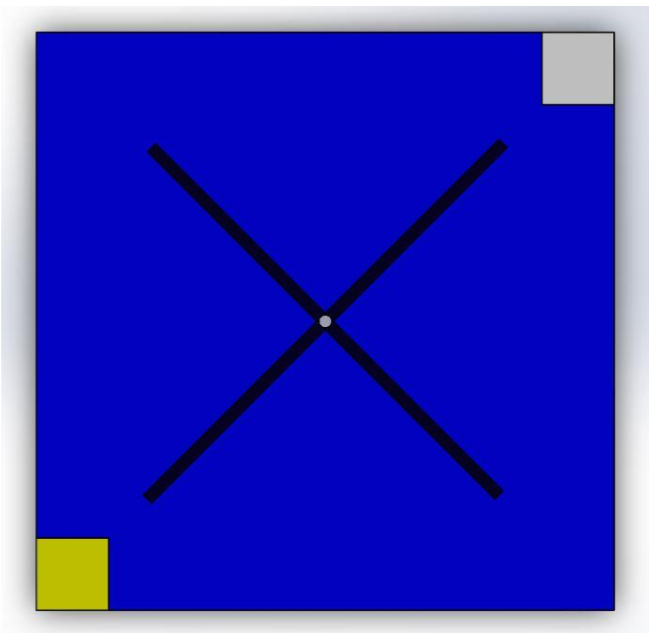 3. Robot Specifications
You should design and build the robot that must fit within a square of maximum dimensions of 25cm in length and 25cm in width. A robot may expand in size autonomously after the start of a trial. You should build (or buy) the mechanical device chassis, design and build the interfacing circuits for the device, and choose the best appropriate sensor(s) and actuator(s).
Robots should be autonomous and controlled via Arduino ONLY. Devices should receive no external signals or directions (human, machine, or otherwise). No blind spinning, actuation or blowers or electric fans are allowed to push the opponent’s balls. The robots should grab the balls autonomously. Also, electronic or physical jamming is forbidden and may lead to disqualification.

4. The Game
At the start of each game, the two teams will be randomly assigned a color (White or Yellow) for the match. The color determines the ping pong’ color the team should score. Games consist of two 90 seconds halves. At the start of the first or the second half of each game, ten colored balls (5 of each color) will be placed randomly on the platform. If all five balls are scored in less than 90 seconds, the half will end at that time. A timeout of exactly 60 seconds will be given between the two halves for any urgent fix. At the end of the time limit, only balls collected at the tube will be counted in the final score. No human interference is allowed once the match begins; this would result in a direct disqualification from the match. The competition is based on a Knock-out format. The scoring would be counted based on the total number of balls in both halves. In case of a tie, a third game of 90 seconds will occur, and the best team during the third half will advance/win

Send your questions before September 19 to: sandykaram3@gmail.com Subject: “Mechatronics EFx”

All questions and answers can be found on: https://docs.google.com/document/d/1ZHiRk-Q3UbDqRERsDGdT69WUs5O8WJny6SRk2GYZd98/edit?usp=sharing